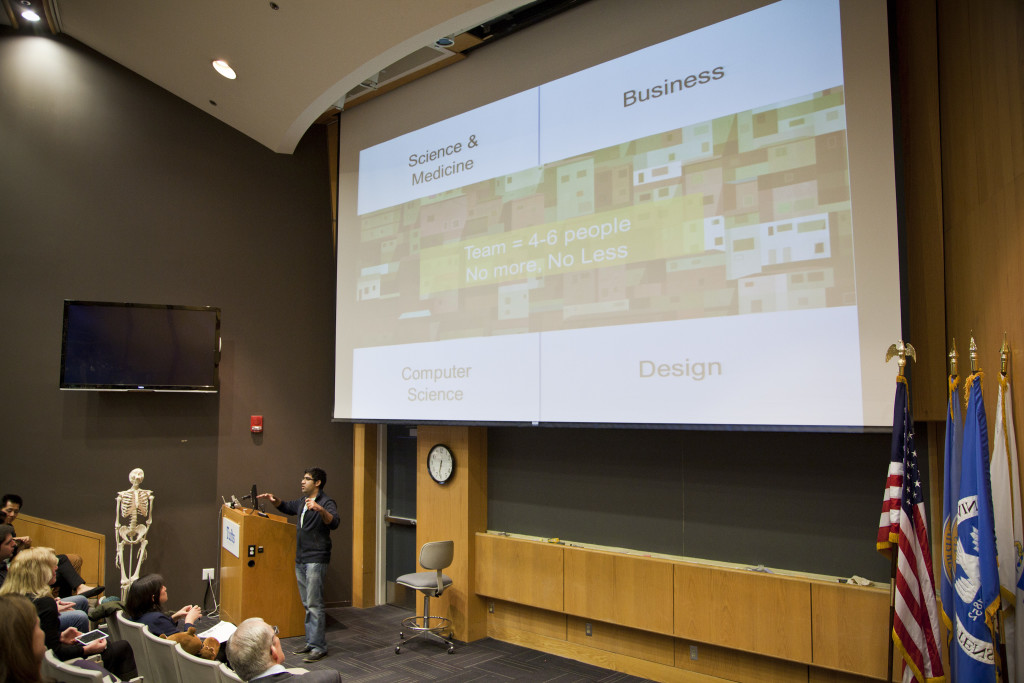 A few weeks back I was lucky enough to attend the Tufts Medstart Hackathon.  The medical school has been running a medical hackathon yearly for the last 3 years.  I found out about it through Dr. Jeffrey Jacobson, a BostonVR organizer, who I met through our partnership with VRcade.  BostonVR partnered with the Medstart team where Dr. Jacobson and Jeff Bail were two of the events mentors.

The reason I flew to Boston to attend the Boston VR Meetup, which is the second US Meetup that I’ve gone to with Virtual Reality (VR) Technology, is that it is now very important when building engaging training content.  VR is so important in that you get the immersion, the 360 degrees, the emotional experience in the 3D space compared with the 2D screen.  Oculus has shifted the landscape to make VR available to the masses.

Since the medical hackathon, I’ve told many about my trip and the majority haven’t heard of a hackathon before.  So here it is: A hackathon is typically a weekend event that combines subject matter experts, technical people, design people and business people.  At Medstart, the theme was “Medical Education”; which drew me to the event.  There were over 150 attendees with 100 participants that were going to join a team to come up with an idea to solve a major problem in Medical Education.

On Thursday night, there was an optional networking event, some demos and presentations to get everybody’s juices flowing.  I was fortunate enough to be able to demo PeriopSim alongside Dr. Jacobson and Jeff Bail.  It also was the first time I met Rohan Jotwani, an organizer of the event, who was amazingly helpful throughout the weekend.

That evening once the presentations started, Rohan gave a great introduction to Dr. Scott Epstein, Dean for Educational Affairs –  Tufts School of Medicine.  Dr. Epstein shared with us a vision of Medical Education talking about the “Triple Aim” (improve health populations, improve patient experience, reduce cost of care).  Next he talked about innovative approaches including virtual patients, virtual worlds, simulation and games.   I especially liked how he highlighted the importance of standardizing learning outcomes while individualizing the learning process where we can track Entrustable Professional Activities (EPA) where students can be observed.  All of this while dealing with the challenge of the increasing time pressure on clinical faculty when more direct observation of students are requested.  How can we as well give students technology to allow them more control and flexibility in learning?  The slide he presented on the Zero Sum Game where it’s being requested that there is an increase in time for communication skills, professionalism, population health, improvement science but this decreases time for basic science and clinical knowledge.

Next up was Dr. Steven Schwaitzberg, well known for his TEDxBeaconStreet talk “A Universal Translator for Surgeons”.   Fellow University of Waterloo grad Bruce Hecht is on the TEDxBeaconStreet Leadership Team.

What I loved most about Dr. Schwaitzberg’s presentation is that he covered some key business concepts including Crossing the Chasm, Hype Cycles and differences between Tools and Procedures in the medical innovation space.   Dr. Schwaitzberg also led development and training for Minimally Invasive Surgery.

Dr. Alisa Niksch was up next to talk about fostering innovation in academia and beautifully quoted Sir Ken Robinson, “It’s education that’s meant to take us into this future that we can’t grasp”.  After all of the medical leader talks we had some fun with technology where Dr. Jeffrey Jacobson talked about VR technology and I was truly honored that he shared what Conquer Mobile is doing with PeriopSim VR and singled me out in the crowd. 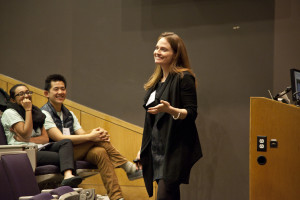 Thursday night of the medical hackathon was strategic for me.   I was looking for a AAA team that could work with Dr. Naren Gupta, Vascular Surgeon and Harvard Assistant Professor, and I during the weekend.  We were looking for experienced Virtual Reality Oculus Rift (VR) developers that knew either Unity or Unreal and a UX/UI Designer.  My role was project manger and business expert and Dr. Gupta was our subject matter expert in clinical medical education.  Thankfully Dr. Gupta and I had developed relationships with the BostonVR group and we were able to get a couple of developers.  It should be noted that I was nervous going into the weekend as our technical talent was secured quite late in the game on Friday. 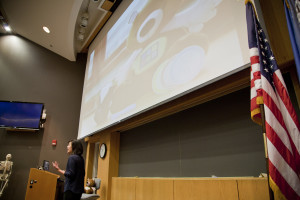 On Friday evening there was another set of presentations giving the participants some guidelines and some good examples of success.  My personal favorites were Ashley Reid from Wellist, who participated in last year’s hackathon, and Hannah Chung from Jerry the Bear who taught everyone about lean startup “bear” development.

Nearing the end of the evening everyone was asked to present the problems they would like to solve.  Dr. Gupta and I formulated the problem and I went up to pitch the idea.  I think there were around 40 problems that were presented to the crowd.  The goal of the short problem pitch was so that a team could rally around the problem to develop a solution.  Thankfully after all of the problems were presented we had a AAA team of 7 secured! 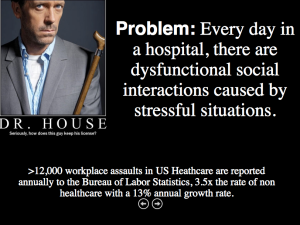 Once our team was formed we submitted it formally in the Medstart team database.  We had to book time with mentors the next day (Dr. Jacobson for Unity help) and set a time to meet in the morning.  Our goal for the weekend was to identify a problem, come up with a solution for the problem and present a demo along with a 3 minute business pitch.  The presentation would happen Sunday mid morning. 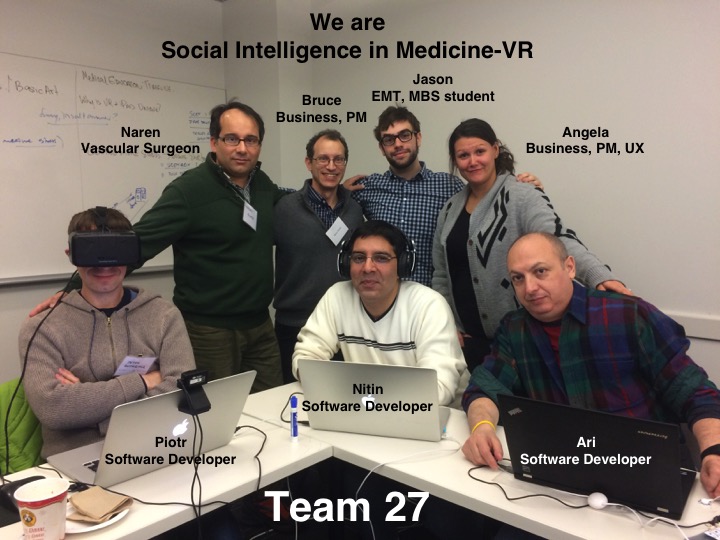 Saturday AM we met and got started quickly.  I took the role as project manager and got the following started:

1. The developers had to get Unity setup and 3D assets imported into the project.

2.  Get the peripherals connecting – Oculus, Myo Armband, Heart Rate and EKG Sensors.  The team had to check out an Oculus DK2 and Myo Armband with the Medstart team.  We also could have integrated with IBM Watson if our solution required it.  IBM had a team (Jeffrey Eisen, Peyling Hseih and Chris Avery) available to give us a hand to get started.

Our development team had a goal to get the technical setup by noon.  This way they would have the rest of the day to work on the training scenario. 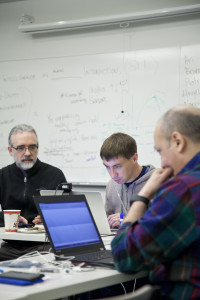 It was our goal to have the pieces for the training scenario nailed once the development team was ready to start building the scenario.  With the subject matter experts, Dr. Gupta (Assistant Professor and Vascular Surgeon) and Jason (EMT), we brainstormed some scenarios that would show a tiny piece of what our solution would do in the little time and resources we had.

We settled on the EMT moving down a hospital hallway with a dying patient on the stretcher when they encounter Dr. House.  Yes, we were able to get a 3D version of Dr. House!  Dr. House is notoriously badly behaved and yells at the EMT walking down the hall.  Now the EMT has a choice to make.  Respond in a way that escalates the situation between Dr. House and himself, respond passive aggressively or respond gracefully and effectively.  The EMT is rewarded verbally by our product S.I.M (Social Intelligence in Medicine)-VR when he uses grace to move beyond Dr. House.  Naren, Jason and I had fun scripting and recording Dr. House and the EMT.

Now we had to really work hard on the business pitch.  Bruce, Jason, Naren and I worked side by side on the following slides (that Ashley from Wellist had in her presentation): 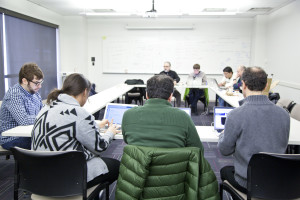 We break at 6pm with the presentation at 98%.  The tech team still had some work to do to get enough of the application working that we could shoot a video to embed it in the presentation.  There was a lot of discussion if we should do a live demo or a video.  We decided we would go for the video and if an opportunity to live demo presented itself we would take it.

Sunday am there were some final tweaks of the presentation and Powerpoint was driving me crazy.  We would have gone with Keynote but the judges initially were going to run the presentations from on PC laptop.  Video was ready to go:  watch here.

While watching the other presentations we got an idea that during our presentation we could do a live demo to the VC Judge, Neil Chheda who was sitting near the aisle.  When we asked him he agreed!  He actually comes from a gaming background so he’d have a good understanding about what it would take to build out the system we were pitching.   Piotr was in charge of this.

Our pitch went off really well.  Naren had a ton of energy, stuck to the key points and was within time.  The questions the judges asked at the end were great and Naren had awesome answers.   I was really proud at that moment.

While the judges went into another room to make a decision we had a number of presenters to listen to.  One of the presentations focused on what happens after a hackathon.  It gave everyone some clear action items and was super helpful.  First action item was to schedule the next meeting!

As Alisa presented the winners I was surprised that we were named the first prize winners.  I was so thrilled and grateful to be part of the winning team!   I should also note a team with two University of Waterloo grads. 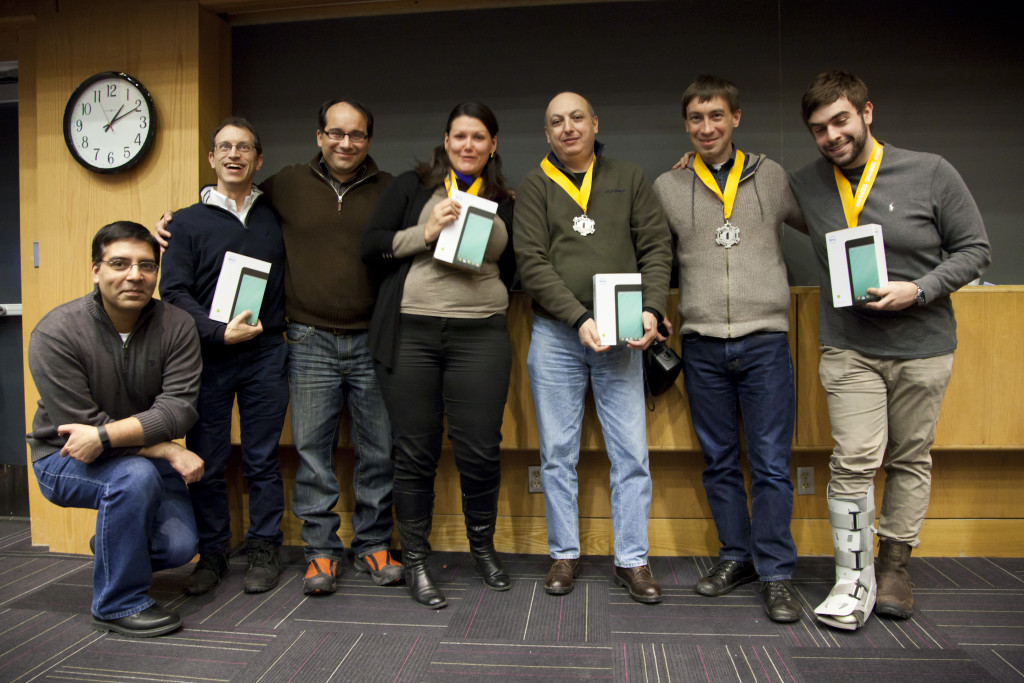 Key strategies that helped us win:

It was a series of discussions between Dr. Gupta and I in the days leading up to the event.

2. What was your favorite part of the event?

The feeling like we did our best after the presentation to the judges and of course hearing the audience burst out in laughter several times.

3. Did anything surprise you over the course of the weekend?

How amazingly friendly and helpful everyone was that I talked to.

4. What are your future plans with your idea?

I think it’s worth it for the team to at least use up the prize with the idea and see if there is positive momentum.

5. How has Tufts Medstart helped you in this process?

The presentations throughout the event were amazingly helpful, including the advisors willingness to help after the event.

6. What brought you to Medstart?

I come from industry and run a company in Vancouver, BC Canada called Conquer Mobile.  We build mobile applications for the medical industry and medical simulation training – PeriopSim.   We are currently looking for relationships, seed investment and customers.  Boston is so well known for having a world leading medical technology community I thought the hackathon may be a great way for me to get connected, meet investors and potential customers.